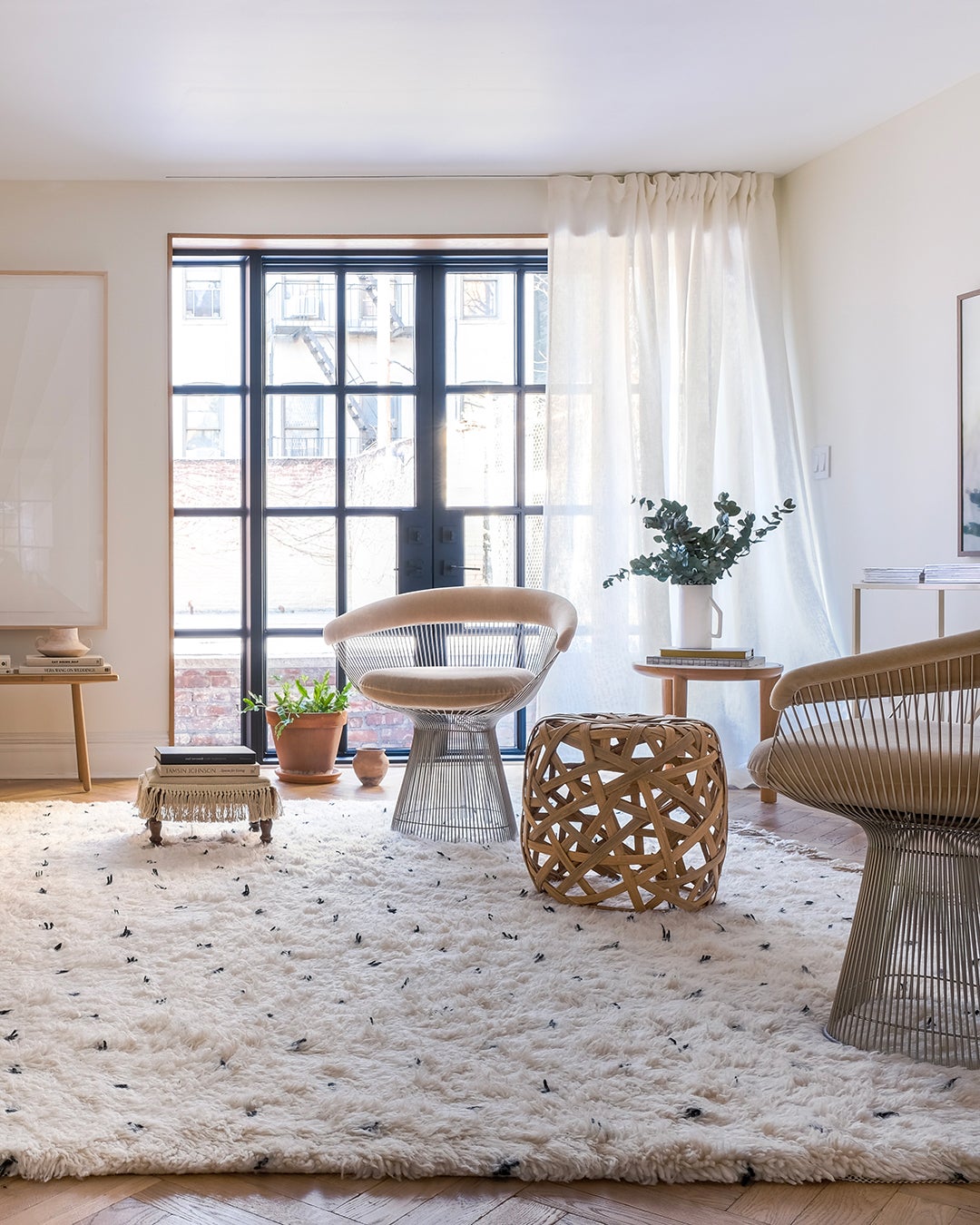 Like many Brooklyn townhouse owners, Ben and Lauren Lindsey viewed the ground-floor apartment in their family home as an opportunity to bring in some extra rent. Following a gut renovation of the former mother-in-law suite (it needed all new water and electrical service), the pair reached out to local artists and furniture makers to help curate the space and turn it into a cozy Airbnb. Then “somehow, somewhere along the way, we had some people ask us if they could shoot there,” says Ben. Now the garden-level unit is a full-time photography location and content creation studio dubbed Localhaus. Brands from Madewell and Vince to Goop and Anthropologie have utilized it for campaigns.

While the neither of the Lindseys comes from an interiors background (he’s a hairstylist by trade; she’s the executive director of packaging for beauty brand Laura Mercier), they have an eye for what makes a good image. “When you think of a photo studio, your first thought is likely a plain box with white walls,” shares Ben. That’s fair, he points out. After all, you want the product to stand out and the room to fade into the background. “But where is the fun in that?” he adds. The idea behind the apartment was to create a tactile, textured environment—think: wax-finished oak cabinets and rustic zellige tile—that would elevate the items, be it shampoo bottles or T-shirts, that are being captured. “It’s ‘work hard, play harder’ under the same roof,” he says.

Lighting Is the Ultimate Luxury 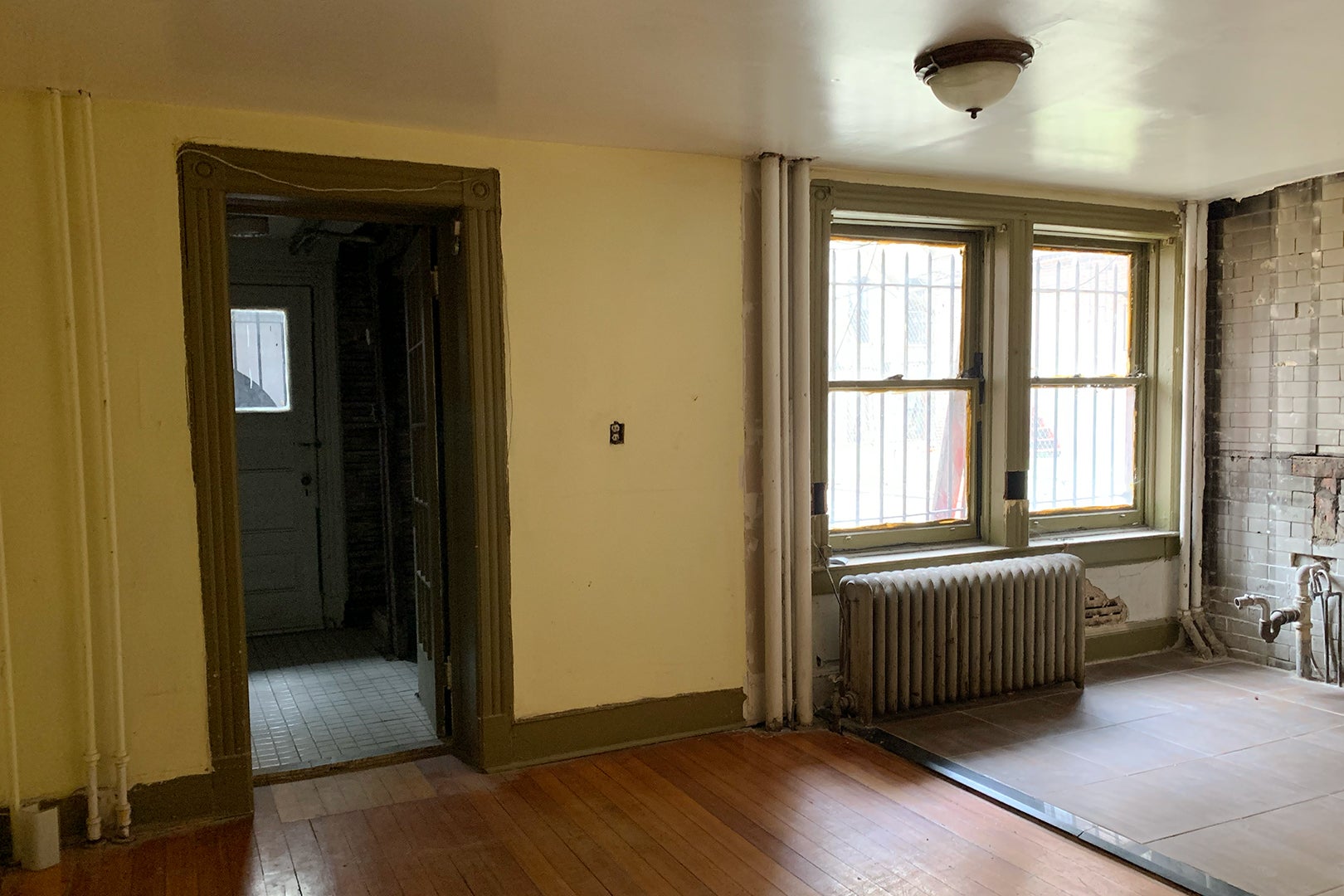 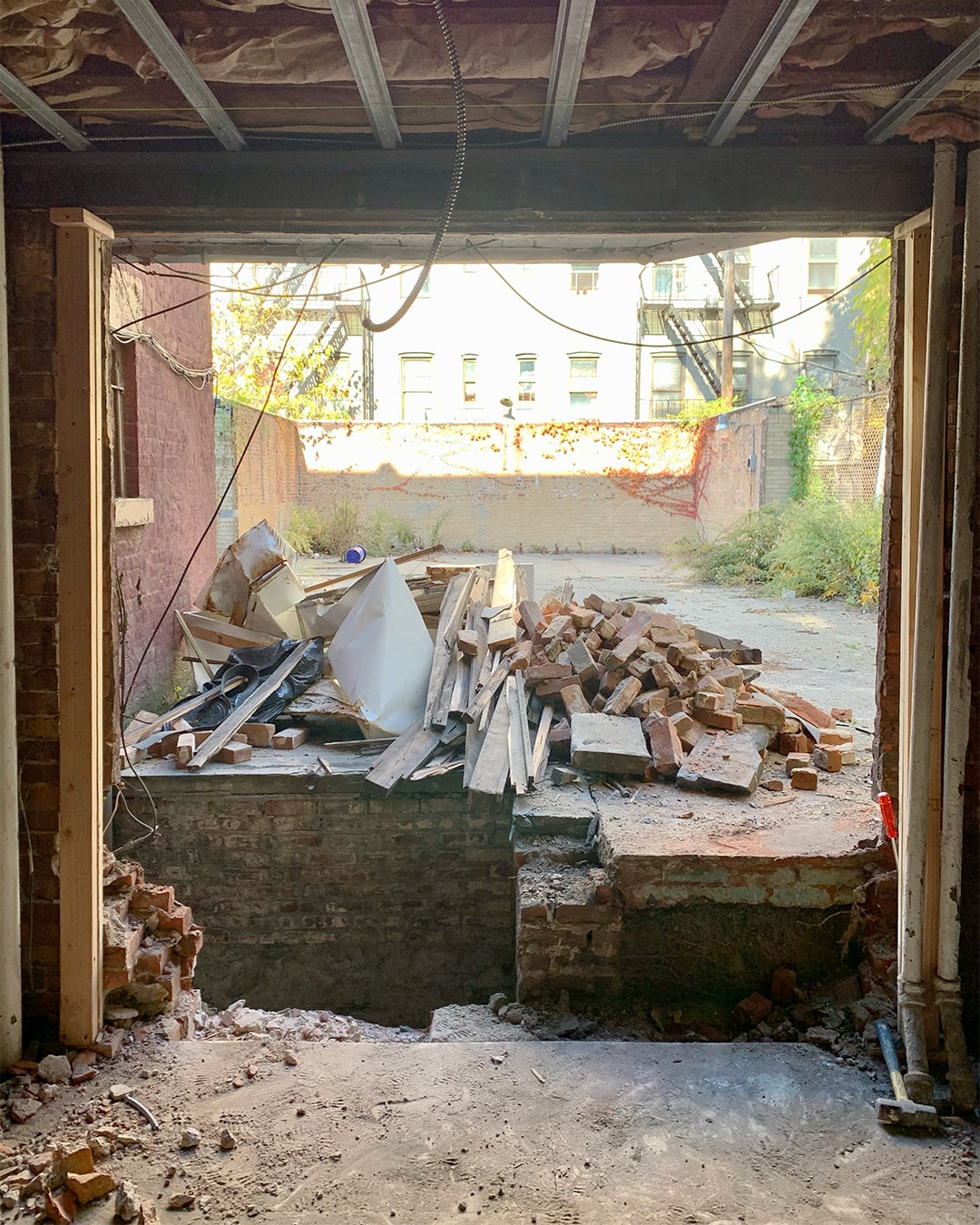 Building out a photography location in a subterranean garden apartment with low ceilings means natural light and good sight lines are a hard thing to come by. Their solution: remove two windows and enlarge the opening to install a patio door, visually extending the living space to the backyard and flooding the room with sunshine during the day. Taking down a few interior walls further opened the space up and allows larger crews to move freely about the apartment. 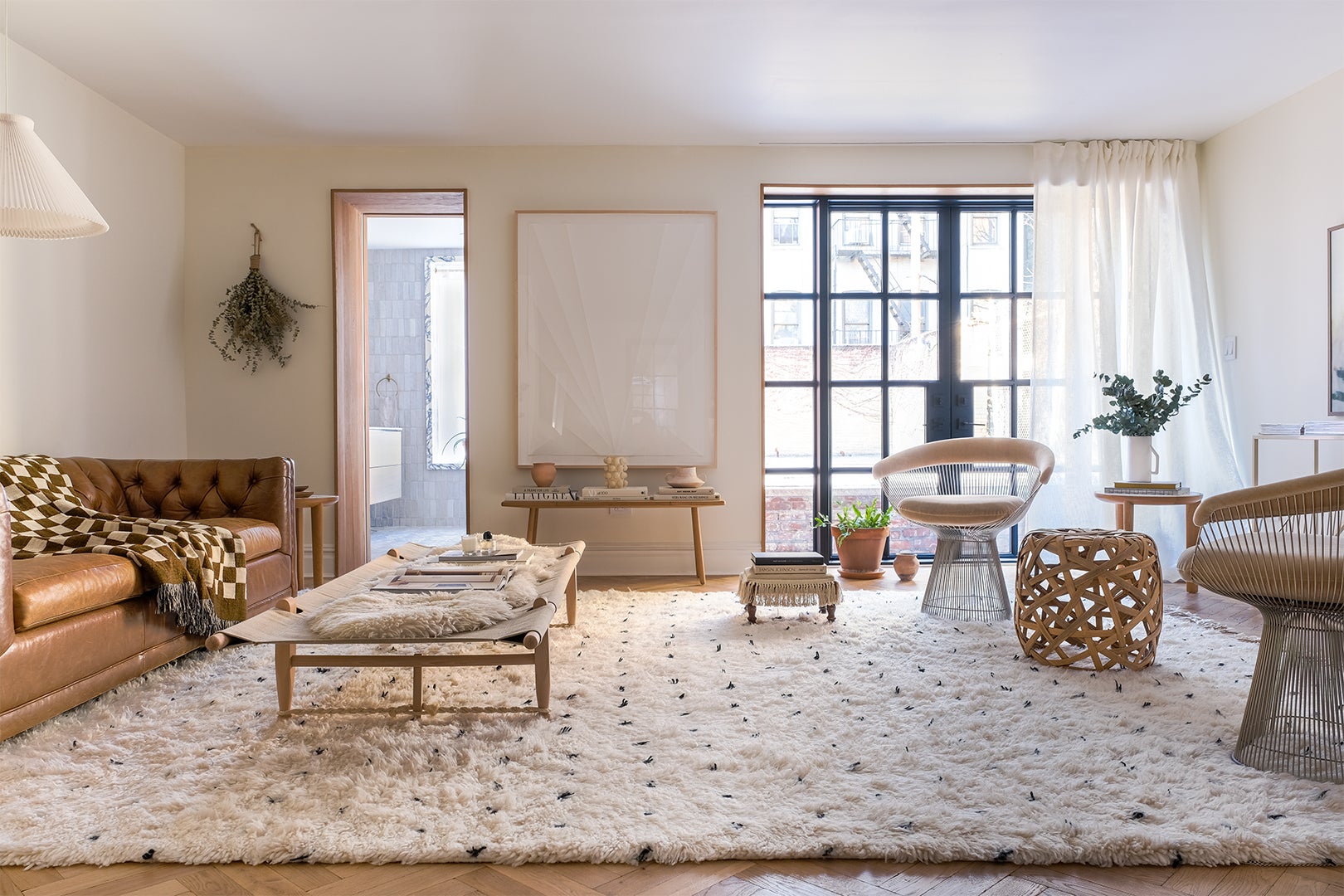 When it came to artificial lighting, “we really tried to pare everything back,” explains Ben. While you’d expect to see pendant lights over an island, because the ceilings are so low, any dangling fixtures would look fussy in most pictures. The breezy paper lantern in the bedroom, for instance, is neutral, airy, and easy to remove if anyone ever needs to take it out of a shot.

Live It Up With Kitchen Amenities 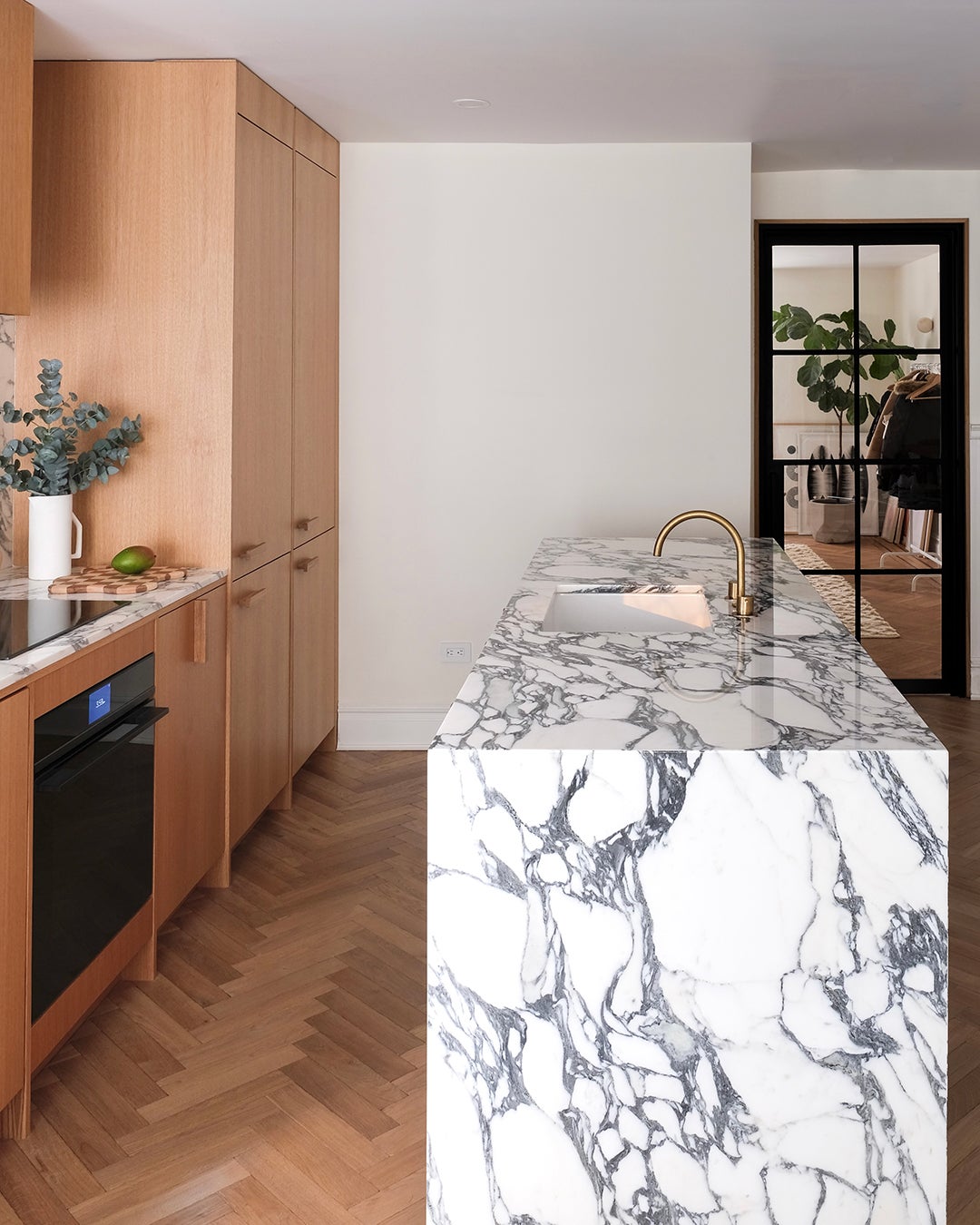 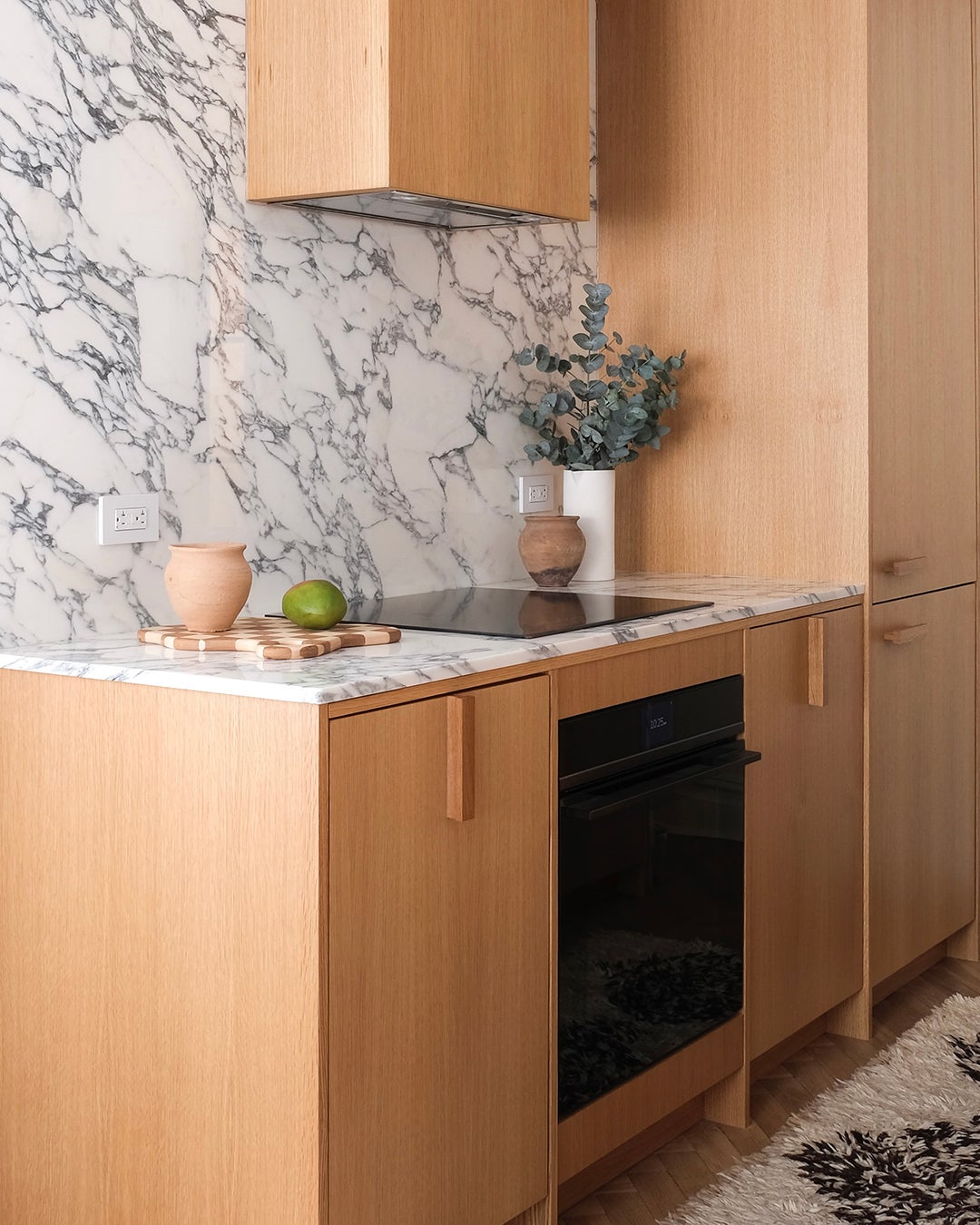 Wanting to make the apartment feel special for people working there 9-to-5, the Lindseys splurged on small but luxurious amenities throughout. In the kitchen, this included a refrigerator with a variable temperature control to switch it between pantry, fridge, and freezer settings; dishwasher drawers; and an induction cooktop. “We wanted to reduce the carbon footprint and really modernize the home in one fell swoop,” says Ben. And even though no one will be showering in the bathroom on a daily basis, they put heating under the herringbone tiled floors to give the ceramic pieces some warmth.

Wax On, Wax Off 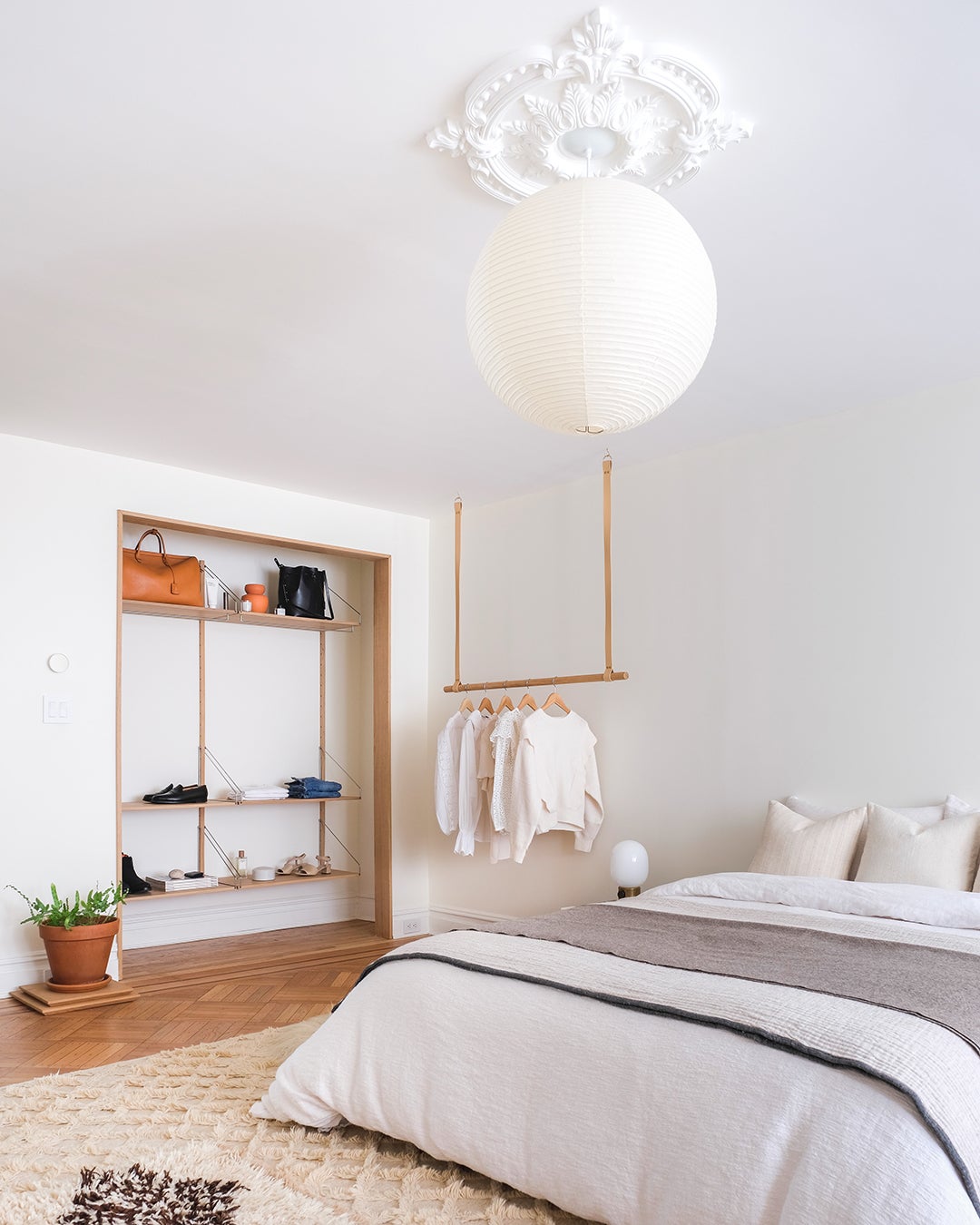 The only salvageable detail from the existing space was the parquet flooring in the bedroom. So when it came to replacing the boards everywhere else, the couple challenged themselves to match the old wood as closely as possible. “Which meant a lot of research into different types and materials,” recalls Ben. They weren’t able to source the same parquet pattern, but they did give the fresh herringbone floors in the main living zones an almost identical look so they at least look like they were installed in the same time period. 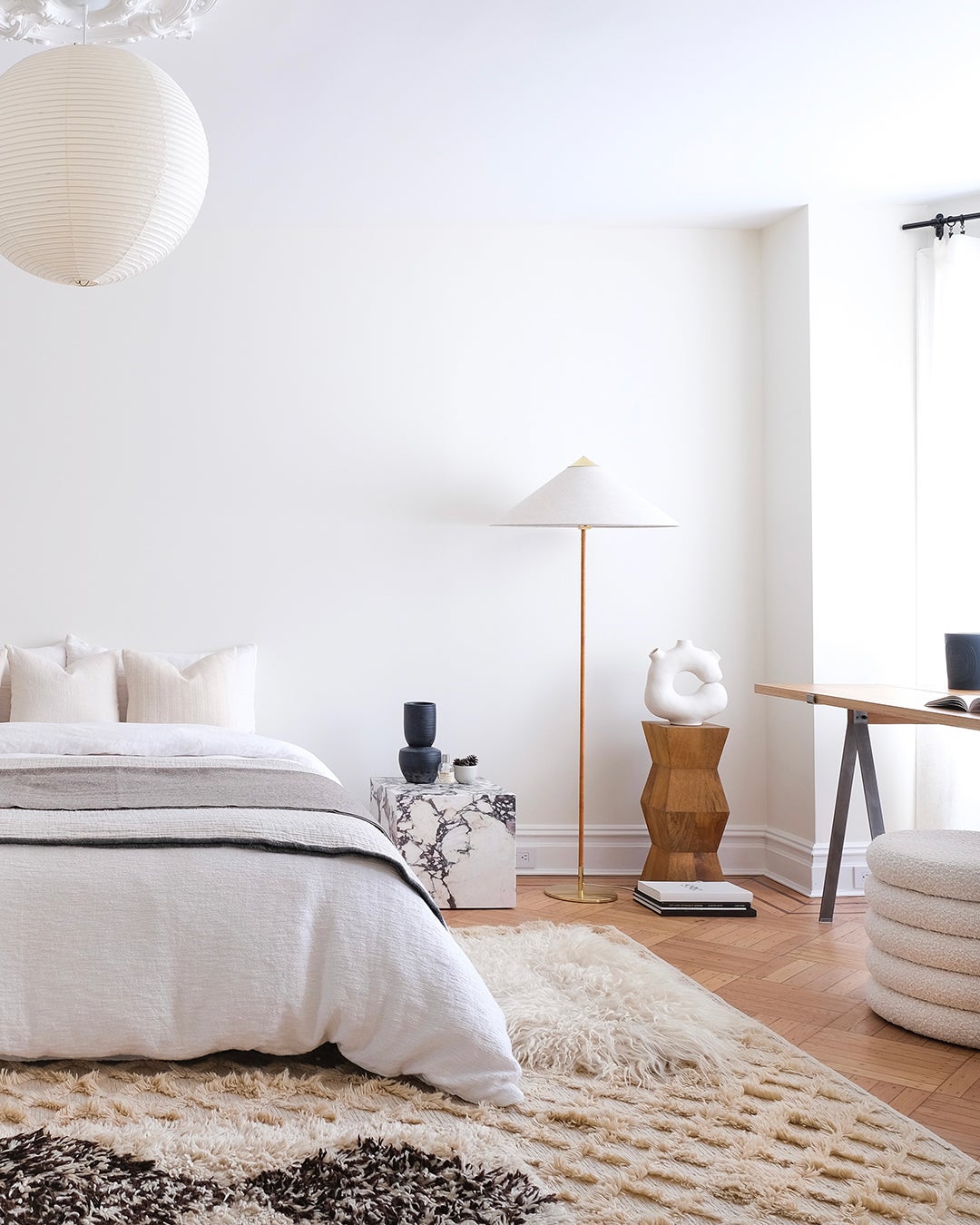 All the floors are finished with Saicos Premium Hardwax Oil Pure, a pure formulation that neutralizes the amber coloring frequently found in aged wood flooring, giving it a natural matte finish. The couple sanded the floors by hand and applied the coating with a brush and old T-shirt. 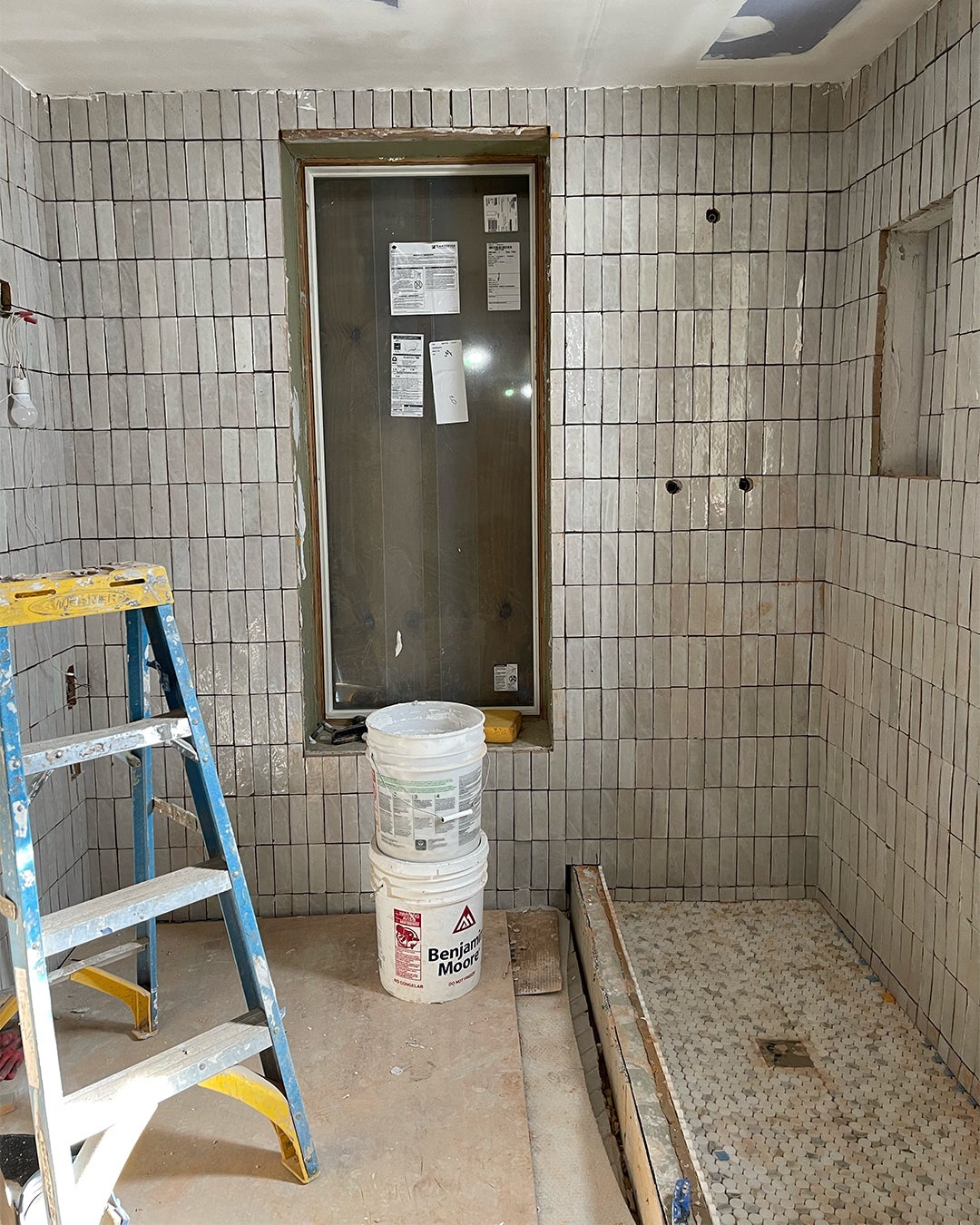 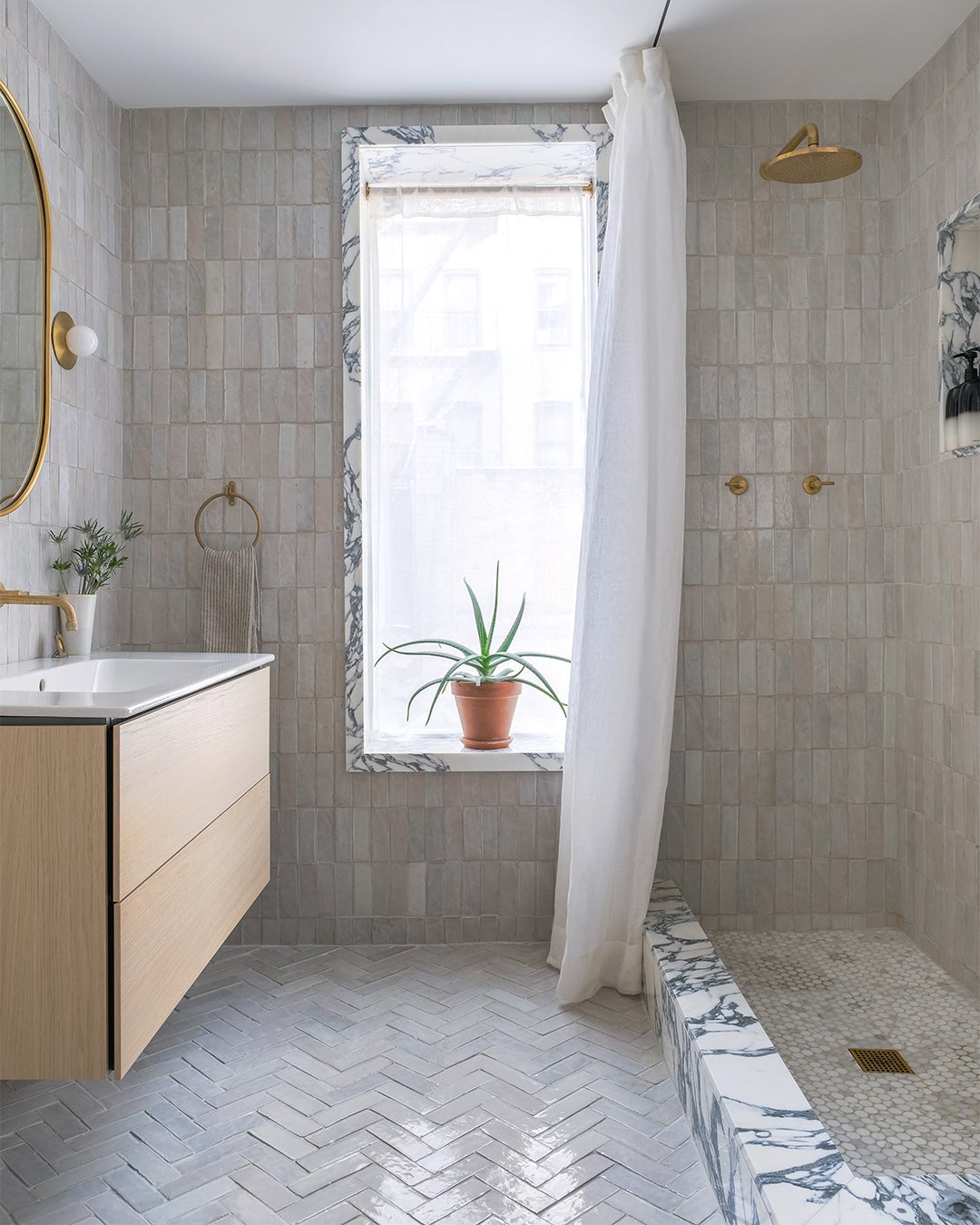 The bathroom, under construction.

The dreamy Arabescato marble on the kitchen island and backsplash was a score: It came from a large batch of remnant slabs. The Lindseys made use of the leftover chunks from the kitchen installation by framing out the shower border, window, and recessed niche. 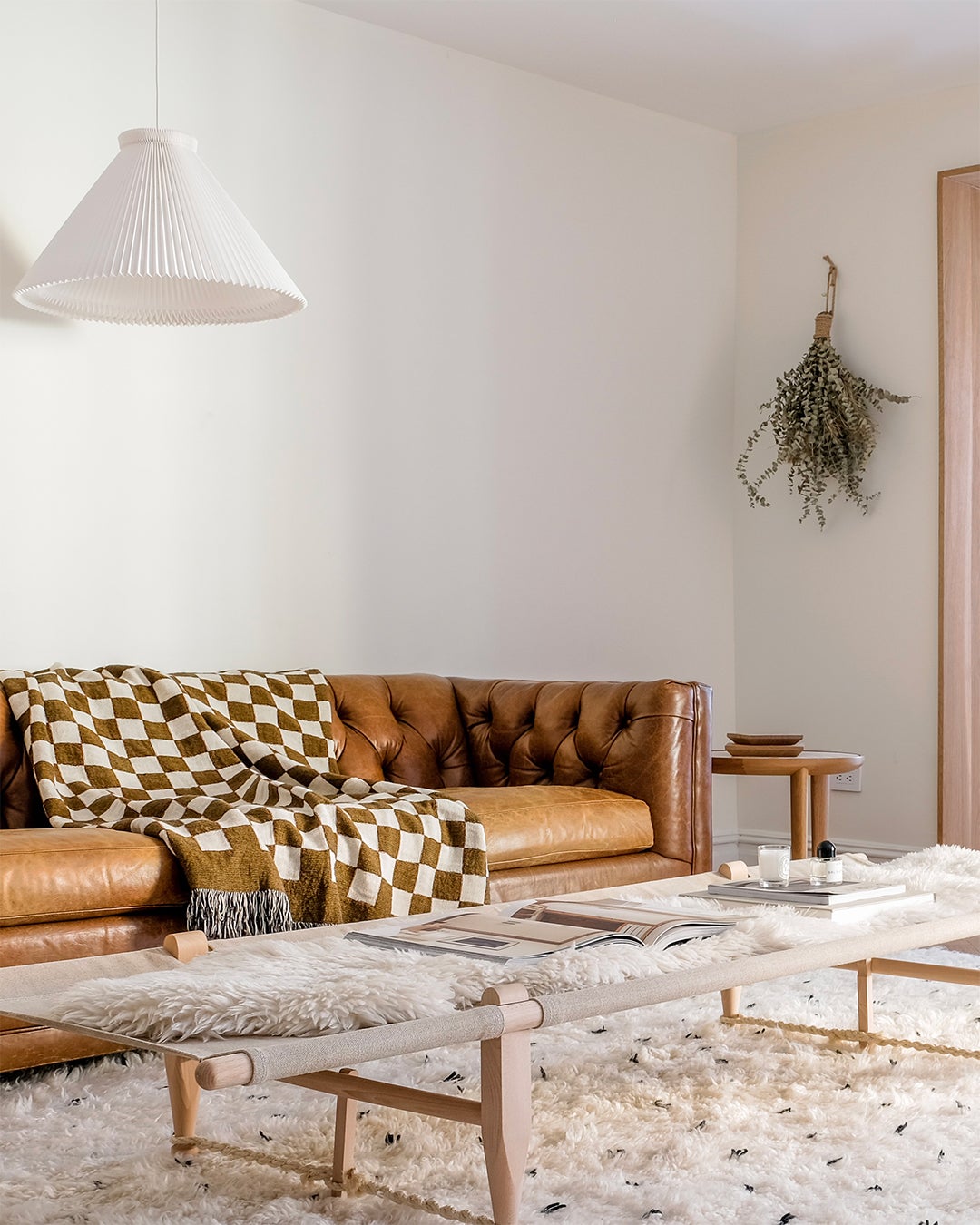 The walls had to be white since it’s a photo shoot location, but that doesn’t mean stark, gallery white. After many paint sample tests, they landed on Farrow & Ball’s Pointing for the walls and All White for the trim. The creamy, warm hue sets the perfect tone for photo shoots, so any multi-hyphenates that book the space can come in and get right down to work.